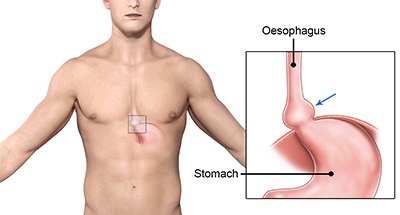 What is a Hernia?

There are natural openings in the wall of the abdomen or within the abdominal cavity that allows certain structures to pass through.

In an acquired hernia, connective tissue degenerates through the process of aging which allows either existing natural openings to widen or new defects to develop in the abdominal wall.  This is further mediated by the increase in pressure inside the abdomen leading to a bulge or protrusion of an internal organ out of the abdomen. Some of the factors that contribute to the development of a hernia through the chronic increase in pressure are persistent coughing, obesity, constipation, and frequent heavy lifting. Herniae are also more common in pregnancy, smokers, previous abdominal surgery, and in certain connective tissue disorders.

What is Hiatal Hernia?

The diaphragm is a sheet of tendon and muscle that separates the abdomen from the throrax (chest). One of the natural openings in the diaphragm is called the Hiatus through which the oesophagus (or gullet) passes through from the thorax to the abdomen in order to join the stomach. In a Hiatus Hernia, the hiatal opening in the diaphragm is widened allowing part of the stomach to protrude into the chest cavity. Hiatus hernia is a common condition that occurs in advancing age and it is highly associated with the development of acid reflux disease (heartburn).

There are four types of hiatus hernia:

Sliding Hiatus Hernia (Type 1): The top portion of the stomach and lower part of the oesophagus (gullet) slide up together through the hiatal opening (or defect) in the diaphragm.

Rolling Hiatus Hernia (Type 2): The junction between the oesophagus and stomach stays in its normal position (below the diaphragm), but part of the stomach roll up into the chest cavity.

Type 4 Hiatus Hernia: The stomach slides into the chest cavity in conjunction with another organ (such as colon, omentum, spleen, pancreas, and small bowel)

A hiatal hernia may not cause any symptoms, but certain individuals may experience heartburn, belching, hiccups, difficulty in swallowing solids or liquids, regurgitation after eating or drinking, and shortness of breath.

The assessment of a hiatus hernia involves in a combination of a number of investigations such as:

Management of this condition will need to take into account of the presence and nature of the symptoms as described above. Surgery is usually recommended in patients with acid reflux and obstructive symptoms.

The operation is performed laparoscopically (key-hole surgery) with the patient under general anaesthesia. The surgeon makes 5 small incisions in the abdominal wall through which a camera and surgical instruments can be inserted into.

The first stage of the procedure is the repair of the hiatus hernia which is often associated with reflux disease. Part of the stomach that has moved up into the chest cavity will be pulled back down into the abdomen. The upper stomach and lower oesophagus is dissected away from the surrounding tissue so that they are freely mobilised down into the abdomen without tension.

The hole in the diaphragm (called the hiatus) through which the oesophagus passes is widened in a hiatus hernia. This is partially closed or tightened with sutures so that the hole only permits the oesophagus through. Rarely, an absorbable mesh may be placed around this repair in a very large hiatus hernia or re-do operation which may reduce the risk of recurrence.

The upper part of the stomach (called the fundus) is then partially wrapped and secured around the lower oesophagus with sutures. This manoeuvre is called fundoplication which serves to re-create the valve effect that contributes to the anti-reflux mechanisms.

Specific side-effect and complications for this operation include: