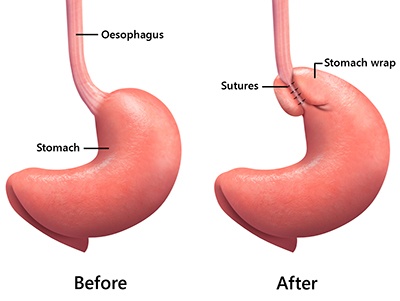 What is Anti-reflux Surgery?

Anti-reflux surgery is a procedure used to treat gastro-oesophageal reflux disease (GORD). Typically, this would usually involve in repair of the hiatus hernia and creation of a fundoplication wrap which is a stomach wrap around the lower oesophagus to prevent reflux.

What is acid reflux or GORD?

Acid reflux, also called gastro-oesophageal reflux disease (GORD), is a condition where the stomach contents (food or liquid mixed with stomach acid) rise up from the stomach into the oesophagus (a tube that carries food from the mouth to the stomach).

The cause of GORD is thought to be due to a number of factors including aging, genetics, obesity, smoking, certain medications (eg, aspirin, ibuprofen), and presence of a hiatus hernia.

Heartburn is usually the main symptom of GORD; a burning-type of pain in the lower part of the mid-chest, behind the breast bone which may improve or resolve with antacid medications. Typically, it can be triggered by certain food and drinks such as tomatoes, citrus, mint, garlic, onions, fatty or spicy food, chocolate, alcohol, and carbonated and caffeinated drinks. Symptoms can also be position related which are worse when laying flat (particular at night in bed). There are also a number of other symptoms associated with GORD such as sore throat, hoarse voice, a bitter or sour taste in the mouth, dental erosions, dry cough or wheezing, regurgitation of food (bringing food back up into the mouth) and pain/trouble in swallowing. Rarely, aspiration of stomach contents into the chest can occur, resulting in pneumonia (chest infection).

Chronic acid (or bile) exposure to the oesophagus can lead to serious complications over time including:

There are several tests that may be performed to confirm or exclude the diagnosis of acid reflux and other associated conditions. These investigations include:

Antacids are over-the-counter medicines that provide temporarily relief to heartburn or indigestion by neutralising acid in the stomach. Other medications such as proton pump inhibitors and H2 antagonists may be prescribed by your GP to reduce the production of acid in the stomach.

Anti-reflux Surgery may be recommended in the following situations:

The operation is performed laparoscopically (key-hole surgery) with the patient under general anaesthesia. The surgeon makes 5 small incisions in the abdominal wall through which a camera and surgical instruments can be inserted into.

The first stage of the procedure is the repair of the hiatus hernia which is often associated with reflux disease. Part of the stomach that has moved up into the chest cavity will be pulled back down into the abdomen. The upper stomach and lower oesophagus is dissected away from the surrounding tissue so that they are freely mobilised down into the abdomen without tension.

The hole in the diaphragm (called the hiatus) through which the oesophagus passes is widened in a hiatus hernia. This is partially closed or tightened with sutures so that the hole only permits the oesophagus through. Rarely, an absorbable mesh may be placed around this repair in a very large hiatus hernia or re-do operation which may reduce the risk of recurrence.

The upper part of the stomach (called the fundus) is then partially wrapped and secured around the lower oesophagus with sutures. This manoeuvre is called fundoplication which serves to re-create the valve effect that contributes to the anti-reflux mechanisms.

Specific side-effect and complications for this operation include: